The session Pan-cancer Distinctions in Tumor Biology across Ethnicity and Genetic Ancestry featured a panel of investigators who discussed emerging basic science evidence of biologically distinct tumor phenotypes among race/ancestry groups and highlighted their newest findings related to African-American disparities.

Distinctions in breast and gyn-onc cancers in Afro-Caribbean women “We enrolled 1,018 breast and ovarian cancer patients for the study,” George said. “Of them, we identified pathogenic mutations in 144 individuals, predominantly across three genes — BRCA1, BRCA2, and PALB2.”

Researchers also observed that women from different countries had different rates and types of breast cancer pathologies. In the Bahamas, for example, George said the majority of the women had triple negative breast cancer. In Haiti, there was a large percentage of women with HER2 breast cancer.

“The results of our study suggest that in people of Caribbean descent diagnosed with breast or ovarian cancer, one in seven will have a pathogenic gene mutation,” she said. “With this information, targeted therapies and prevention approaches can be used to improve outcomes.” Additionally, she reported that African American men had significantly more West African ancestry in cases when compared with unaffected controls.

“African American male lung cancer patients with PDE4D overexpression may be good candidates for PDE4 inhibitors,” Mitchell said. “Further studies are needed to pursue the mechanistic links between ancestry and the PDE4D function.” 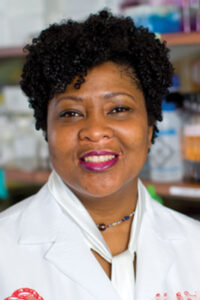 “The DARC gene is actually expressed, primarily on red blood cells, but also on endothelial cells, and we know that there is an allele called Duffy-null that exists in this gene, and it is primarily across the globe associated with ancestry from Africa,” Davis said. “In a cancer context, what we want to pay attention to is the fact that on red blood cells, DARC is a chemokine sink, but in the area of inflamed tissue, it is also a cytokine pump, creating a gradient that recruits immune cells into the tissue space.”

Studies have shown, she said, that it is the expression of DARC on the endothelial cells that assists the invasion of neutrophils into the tumor space.

“What we start to see unraveling is that the immune landscape is very different across ancestry groups,” Davis said. “While it is important to quantify for genetic ancestry in the context of identifying genetic drivers, we also need to pay attention to self-reported race, as this correlates with the social environment, which could also impact comorbidities on a population level.”

In addition to this On Demand session, the presenters participated in a live Panel Discussion on Tuesday, April 13. Registrants can watch replays through June 21, 2021.